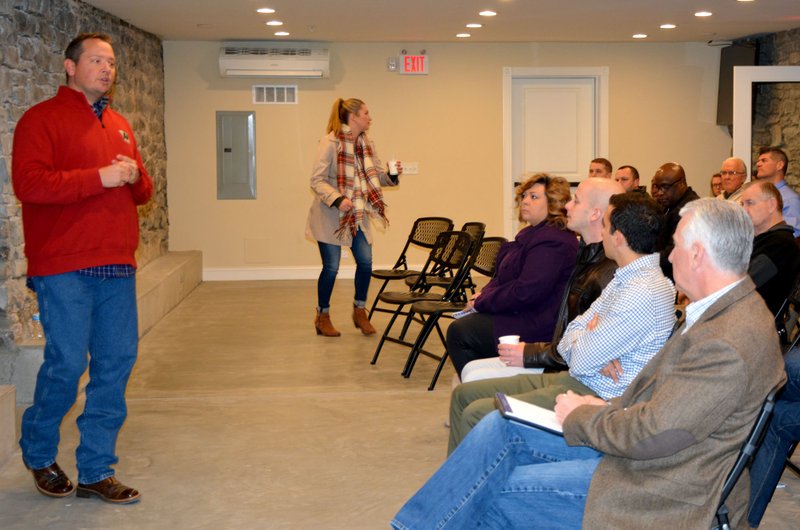 Hunter McFerrin/Herald-Leader The Chamber of Commerce held their “Coffee+E” event on Tuesday morning, where a group of community members convened for a networking session and to hear a brief speech from Grant Loyd (left) about his career. Loyd is the president of Alternative Design and Manufacturing, a Siloam Springs-based metal fabrication company. Loyd spoke about a wide range of issues pertaining to his career; from the good, the bad and everything in between.
A mix of business leaders, entrepreneurs and innovators in the community gathered at the Courtyard Event Center for the “Coffee+E” event on Tuesday morning.
“Coffee+E” is a bi-monthly networking event hosted by the Siloam Springs Chamber of Commerce and Tuesday’s meeting was also sponsored by Startup Junkie. The beginning of the event is a time for professionals of various backgrounds to meet and speak with new people and exchange ideas and information, followed by a guest speaker with a demonstrated acumen for entrepreneurship and leadership.

Tuesday’s speaker was Grant Loyd, president of Alternative Design Manufacturing and Supply Inc., a Siloam Springs-based company that specializes in metal fabrication and more specifically, caging systems that are used for animal research, according to the company’s website. The company was founded in 1987 by Loyd’s parents, Eddie and Georga Loyd, and has grown considerably since then, operating across the United States with distribution facilities around the world, from South Africa to Bangladesh.

Loyd has been with the company since its inception working in a number of different positions. In 2014, Loyd’s parents sold the company to Grant and his wife, Jessie Loyd, at which time he took over as company president. Loyd touched on a number of topics on Tuesday, beginning with his family and how their entrepreneurial influence helped guide him toward many of the successes he’s experiencing today. He said the story of his company began with his grandfather, who moved to Arkansas from Oklahoma and settled on a farm and began raising chickens.

“(My grandpa) decided to raise his family on a farm, which was a blessing to me as one of his grandkids,” Loyd said. “That’s kind of where we started out, with a cattle operation and a poultry operation. Back then, those cages would rust out before you could pay them off. That’s why my father and brother started looking for new caging and no one would give them what they wanted. You don’t want to keep buying something that’s going to rust out before you pay it off, so being the entrepreneurs and innovators they are, they started looking for different methods and looked at the wire that’s used in crab traps and said ‘If it’s good for saltwater, it’ll be good for caging.'”

Loyd also discussed some negative aspects of his time at the company and emphasized that it hasn’t always been easy and that there was a time they began selling products like Razorback license plates and trailer hitches to keep up with expenses. While times have been tough and still are in some regards, Loyd encouraged the audience to try and appreciate struggles they experience, because a lot of times a negative can be turned into a positive.

This turned out to be the case for Alternative Design and Manufacturing, as the idea to sell trailer hitches and license plates quickly expanded into other ventures, such as the installation of bike racks and flag holders around town, Loyd said. Eventually, it culminated in the company’s interest in construction, and they have since worked on a number of projects across Northwest Arkansas, like J.J.’s Beer Garden and Brewing Company in Fayetteville or Red Barn Apartment Complex in Rogers. In his finishing remarks, Loyd described his idea of successful leadership.

“My aspirations aren’t necessarily to be this $20 million company, or some huge, you know, just constant growth, money hungry company; my job is to provide for my employees,” Loyd said. “If I’m meeting their goals, meeting their house payments, their car payments, if I’m focused on that, then I’m successful. I’m not worried about myself, if I’m meeting (my employees) needs, then I’m going to be okay. That’s truly what my focus has always been.”

The audience was given the chance to ask questions of Loyd. Following are two of those along with his response.

• How do you attract and retain talent?

“Anyone that drives by our building, especially nowadays, sees that we were putting up and down a ‘Welders needed’ sign, and I finally just left it up,” Loyd said. “It’s also tough doing that when you’re going through changes in your business and after you’ve made different cuts in your business and you’re trying to bring talent over. Engineering is a very tough area for us to hire and welders are a very tough area for us to hire, because we’re specialized welders. I’ll be quite frank with you, I don’t know if anyone here has a welding license from college, but when we get those in, we don’t hire those people because they don’t know how to weld like we do. They’ve had some education on it, but it’s easier for us to train them. So most of our talent, well, we have people that have been with us for a long time, and we’ll go through the chamber on some things to attract talent, but a lot of ours we’re training within and also we’ve got people that have been with us for a long time. A lot of it is trying to provide an honest, fair and ethical environment, and that’s how we maintain what we do here.”

• How is the tariff issue (with President Donald Trump’s administration) affecting you right now?

“Well, it’s up and down, a lot of the problem that we have is the unknown,” Loyd said. “I’ve always said either do it or don’t do it, I don’t like the threats because there’s a lot of companies that are bigger than us. So when there’s a scare or a tariff mentioned, all these bigger people go out and buy up all of the material. So prices go up even though the tariff hasn’t even kicked in. That’s one of the big things with this order (that I talked about earlier). They want a year guarantee on a price and I can’t give them a price guaranteed for over a month. So it affects us quite a bit just because we don’t know what they’re going to do, I’m not going political but one positive/negative is, one tweet can change our pricing structure a lot. You never know what’s going to happen.”